Animals Are Running Out of Places to Live

33%, 45%, even upwards of 60% – these are the staggering amounts of suitable habitat some species have lost in the past two decades alone, leaving them struggling to cling on in a dramatically changing world.

This habitat change data, calculated by the Map of Life as part of our Species Habitat Index, was featured prominently in a recent New York Times article “Animals Are Running Out of Places to Live." 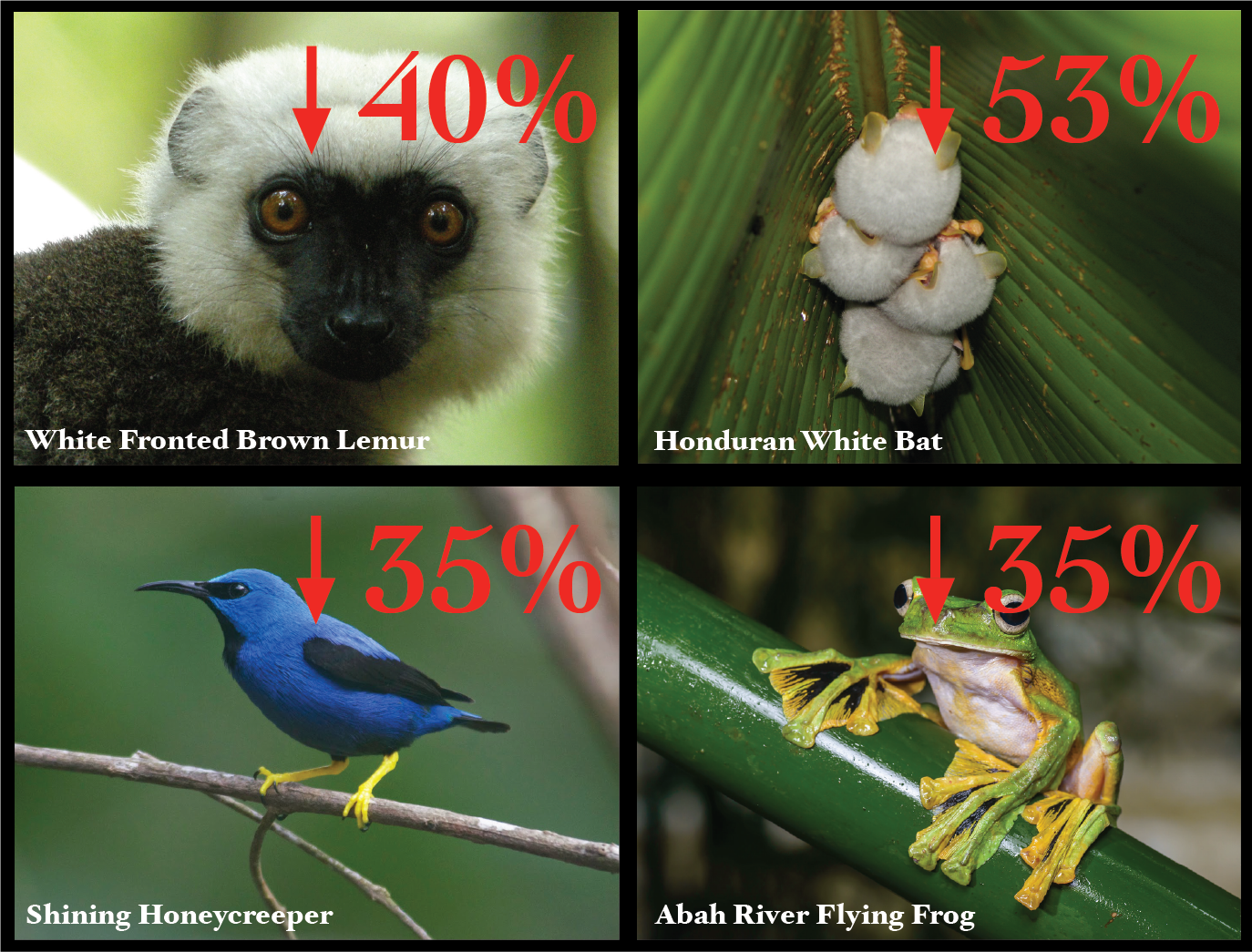 “Can we find a way to share the planet with the rest of its inhabitants?” rings the plea from the article, which shares the faces of those species facing the most severe habitat loss – species like the miniscule Honduran White Bat, which has suffered a 53% loss of suitable habitat area and a 46% decrease in habitat connectivity since 2001, and the Madagascar-endemic White-Fronted Brown Lemur, which has lost 40% and 36% of its habitat area and connectivity, respectively.

Screenshot from Map of Life.

The Species Habitat Index is one among our suite of biodiversity indicators that measures annual, species-level change in habitat as well as nationally-aggregated indices. Fusing remotely sensed environmental layers with species occurrence, distribution, and trait data, we calculate the change in suitable habitat area and connectivity for tens of thousands of terrestrial vertebrate species over two decades to track how ecosystem integrity and species populations change over time. The Species Habitat Index addresses Goal A of the Convention on Biological Diversity’s Post-2020 Global Biodiversity Framework:

Goal A: The integrity of all ecosystems is enhanced, with an increase of at least 15 per cent in the area, connectivity and integrity of natural ecosystems, supporting healthy and resilient populations of all species, the rate of extinctions has been reduced at least tenfold, and the risk of species extinctions across all taxonomic and functional groups, is halved, and genetic diversity of wild and domesticated species is safeguarded, with at least 90 per cent of genetic diversity within all species maintained.

The NYT article highlights the crucial decisions currently underway at the COP15 in Montreal, where BGC Center members are leading conversations about the implementation of the biodiversity indicators for national monitoring and conservation decision making.

Read the full article on the New York Times and learn more about the Species Habitat Index at here.

In a new study, a team of researchers created maps and assessed regional trends in how well existing species data are able to represent the distribution of 31,000 terrestrial vertebrates worldwide and therefore help inform policies and actions for sustaining biodiversity and its benefits.

“These maps highlight the most rewarding opportunities for citizen scientists, and government agencies, and scientists to support biodiversity monitoring and help close critical knowledge gaps,” said Walter Jetz, professor of ecology and evolutionary biology and of the environment, director of the Yale Center for Biodiversity and Global Change (BGC), and senior author of the paper.

The study was published Aug. 10 in the journal PLOS Biology.

The need for such information is critical as environmental and policy leaders continue to create strategies to protect species diversity worldwide as part of the Convention on Biological Diversity, an international treaty with the aim of conserving and managing global biodiversity which is assessing progress towards those goals.

Jetz and his team have created one of the key tools used by world leaders to monitor, research, and create policies that protect species worldwide — the Map of Life.

In the new study, the researchers present a framework to help pinpoint where additional monitoring is most needed. While there has been a dramatic increase in the amount of data collected on vertebrate species in the past 20 years, they find, not all of this data has yielded new insights on biodiversity. For instance, data on bird species shared by citizen scientists and others tend to be redundant due to the popularity of certain species commonly found in highly populated areas. Most new data collected on birds are from the same species and places.

The analysis was conducted by Yale’s Ruth Oliver, an associate research scientist at the Center for Biodiversity and Global Change, Jetz, and colleagues.

Alarmingly, the study finds that data critical for characterizing biodiversity in many countries has levelled off or, in some cases, even decreased. According to the analysis, 42% of countries have inadequate information on vertebrate biodiversity and have seen either no increase or a decrease in data coverage. Only 17% of countries have achieved sufficient data coverage and also seen an increase in new information on species.

“We hope our work quantifying the tremendous complementary value of observations of underreported biodiversity can support more effective data collection going forward,” Oliver said. “It’s amazing how much we still don’t know about the known species on this planet.”

While the indices used in the study were used to demonstrate the biological diversity of terrestrial vertebrates, they can be readily updated as new data becomes available and expanded to other taxa, such as marine and invertebrate species. This work is supported by the Map of Life team and the results are available for exploration at mol.org/indicators/coverage.

View the article on Yale News

Itching to discover a new species? Follow this map

Ecologists involved in mapping all life on Earth have now taken the next step: predicting where the life we don’t know about is waiting to be discovered. As a first pass, they have created an interactive map showing diversity hot spots with the richest potential for new mammal, bird, reptile, and amphibian species. They describe their results today in Nature Ecology & Evolution.

“Unknown species are usually left out of conservation planning, management, and decision-making,” says co-author Mario Moura, an ecologist at the Federal University of Paraíba. “If we want to improve biodiversity conservation worldwide, we need to better know its species.”

It never sat well with Moura that an estimated 85% of Earth’s species are still undescribed. So, in 2018, this newly minted Ph.D. in ecology teamed up with ecologist Walter Jetz at Yale University to come up with a way to better predict where those unknowns are. “The chances of being discovered and described early are not equal among species,” Moura explains. For example, large mammals living near people are much more likely to have been documented by scientists than tiny frogs living in a remote jungle.

View the article on Science

Monday, July 19, 2021
The MOL team is excited to announce that an updated version of the Species Status Information Index (SSII) is now available! The SSII assesses how well nations’ available biodiversity data covers species’ expected geographic ranges. The SSII has been endorsed by GEO BON, IPBES, and the CBD as a rigorous indicator of species occurrence data gaps. Using the SSII, we assessed the taxonomic and spatial coverage of publicly available biodiversity records available through GBIF. Users can now explore and download national trajectories in closing spatiotemporal biodiversity data gaps from 1950 to present for terrestrial vertebrates. We hope that the SSII, along with other metrics, can help direct future data collection and mobilization to help understand and protect global biodiversity. Check out the SSII here: mol.org/indicators/coverage read more »

Tuesday, December 17, 2019
Growing threats to biodiversity require detailed, timely information on species’ status and trends in order to deploy conservation actions efficiently and effectively. Camera trapping, or the use of remote, motion-activated cameras, has grown quickly in popularity as a means to collect a massive number of observations of terrestrial mammals and ground-dwelling birds. This deluge of information on wildlife must currently be sifted through manually, limiting the scalability of this potentially transformative technique for global biodiversity monitoring. To combat these challenges, Map of Life partnered with Conservation International, World Wide Fund for Nature, the Wildlife Conservation Society, the Smithsonian’s National Zoo and Conservation Biology Institute, the North Carolina Museum of Natural Sciences, and Google to create Wildlife Insights, a groundbreaking platform for scientists, conservationists, and the public to upload, analyze, and share camera trap images of wildlife. Central to Wildlife ... read more »

Map of Life and National Geographic team up in celebration of E.O Wilson’s 90th birthday to put unknown biodiversity on the map

Thursday, October 24, 2019
(Photo credit: Jon Markel) Despite centuries of exploration, we have yet to discover many of the species that we share this planet with. And even for those we already know, we often know very little about their true geographic distribution. This ignorance about life on Earth fundamentally limits our ability to conserve it for future generations. With this in mind, and in celebration of E.O. Wilson’s 90th birthday, the National Geographic Society (NGS) has recently announced two Requests for Proposals to promote two major types of biodiversity discoveries which will be guided by research conducted by the Map of Life, supported by the NGS and E.O. Wilson Biodiversity Foundation. The first type of discovery supported aims to address the so-called Linnean shortfall, named after Carl Linneaus, the father of modern taxonomy. It sets out to help identify and describe the many still unknown species in existence before they might go extinct before they are ever discovered. Work by Map of Life, and specifically its ... read more »
View Blog Posts